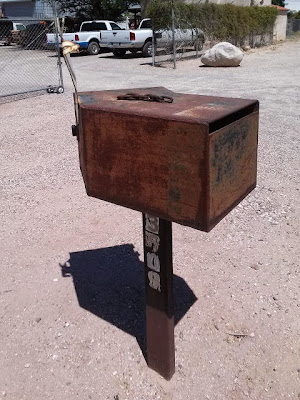 Here's a rusted steel mailbox with a white hand as its flag.

Next, a photo from another corner: 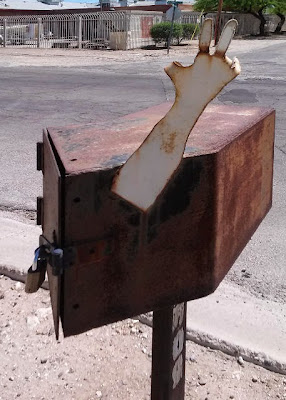 I found the box on April 18th.

When I photograph mailboxes, I don't ring the owner's doorbell or do anything else to get the story of the box — unless I see a resident, or they see me. (As you'd guess, people who see me taking photos of their mailbox tend to walk over and ask what the heck I'm doing.)

On April 18th, I was visiting artists' open studios on the twice-yearly tour. On my way to one of the studios, I passed by a mailbox with plants in front of mountains topped by clouds: 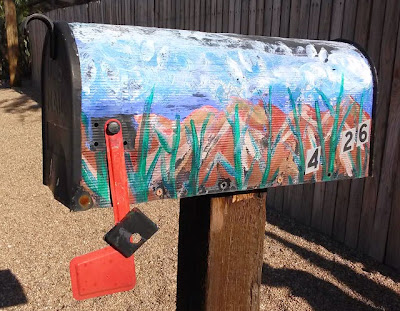 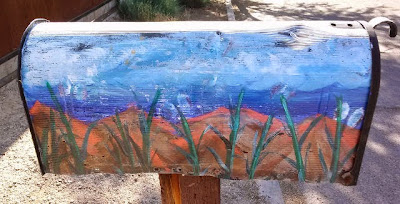 The gate next to the mailbox was open and a man walked out. So I went over to chat and ask if I could photograph the mailbox. He was glad to talk; he told me some of the story. It was painted by an artist named Jessica Lemar who now lives in Colorado. Cars have run into the mailbox a couple of times, but he's kept putting it back up. He put me in touch with Jessica, and she told me about her Facebook page named ArtOrBust. She does a lot of nice work!

Some day I'd like to send postcards to mailbox owners, with my photo of their box, to ask the story of the mailbox and who made it. It's nice when happenstance lets me get the story as I take the photo. 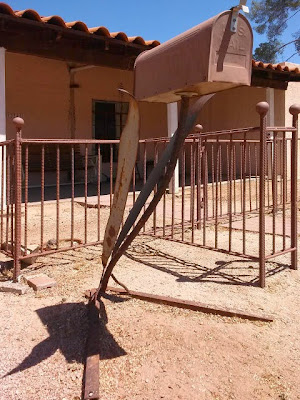 This tan-colored mailbox sprouts a couple of long leaves from the bottom of its post.

I couldn't find a good angle to show both leaves when I stopped by on April 18th.

That's a white mailbox with the family's name and handprints in blue. I found it on April 14th.