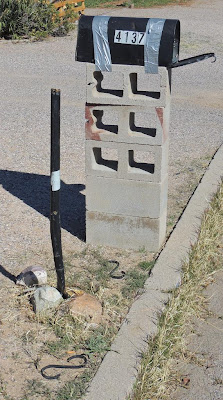 Looks like someone had an accident! This black mailbox seems to have been knocked off its metal post, which is now bent (also notice the scrolls on the ground). Now it's duct-taped to a stack of cinderblock.

I took the photo on February 26th, so this might have been fixed by now. (In tomorrow's, I'll show a mailbox nearby that looks like it might've met the same fate as this one — but with a different result.)
Posted by Jerry Peek at 1:01 AM