David Aber reeled this one in: He found a photo of a piranha mailbox in Australia. David wrote to suggest that I post it. After all, he pointed out, when I'm traveling I sometimes show you mailboxes from outside Tucson. Okay, out of the water!, everyone!! 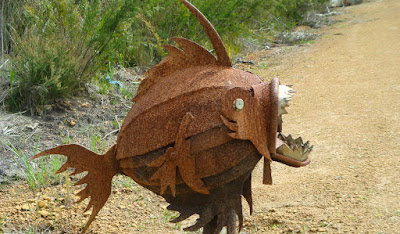 (Dave wrote: “Must be a brave mailman that sticks his hand in this one!”)

I found the author and her ten photos. She (who goes by Jax) gave me permission to show the piranha — and any other photos from her Postie Notes blog — as long as I mention the blog. (If you love quirky mailboxes, don't miss it!) She said the piranha used to be her favourite quirky letterbox in Australia. (As David pointed out, Australians call them letterboxes instead of mailboxes.) (By the way, England calls them postboxes, and “the mail” is “the post”. I don't know what English people call the post under the postbox.)

Valentines to you, Jax, from mailbox lovers here in Tucson! (It may already be February 15th across the Date Line in Australia, but…)


After you laugh at the letterboxes, scroll up to the blog header and click on “Mailboxes” for more hilarious, er, letterboxes. And try to find her new favourite (after 53,000 kilometres on her Postie Bike, and mentioning something about an electron microscope), look for (apologies) the dead cat.

As Jax says, she likes to “push the envelope.”

Email ThisBlogThis!Share to TwitterShare to FacebookShare to Pinterest
Location: Australia