The last few months of 2018 were challenging for me. I haven't been able to take mailbox photos or post them. But things should be back to normal soon! I've pre-posted mailboxes for the rest of January, and I'm hoping that I'll be back to posting photos weekly.

After my life settled down last month, I spent two weeks in Mexico City — which, by the way, the city government now calls CDMX (it's short for CiuDad de MéXico). Though I'd been there before (the photos below are from February, 2016), I stopped in again during a tour of the city center — where our guide told us the building was constructed in the early 20th Century by president Portfio Diaz. He, she said, built grand things to celebrate his power. I believe she also said that it was the first public building in Mexico City with electricity. (With all of its ornate lights and the elevators, it must have needed a lot of power!) 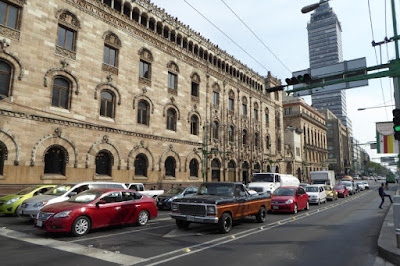 View from outside
Here are a few postal-type photos of things I spotted in 2016 — when I had time to look closely. (By the way, until now I've been putting captions before photos with a colon at the end of the caption. From now on, I'm going to start putting the captions underneath the photos — assuming I remember to, that is. :) 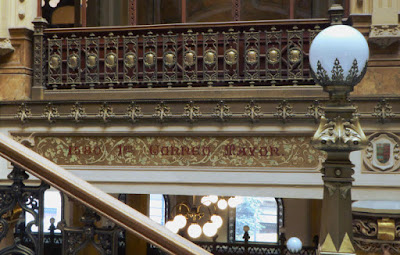 (The wording says, literally: 1580 1st major mail;
I think it means something like 1580: first national mail) 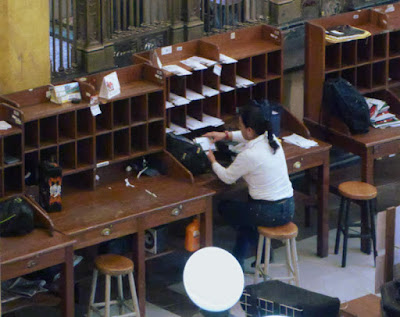 Behind the scenes, through the bars:
a woman sorting mail 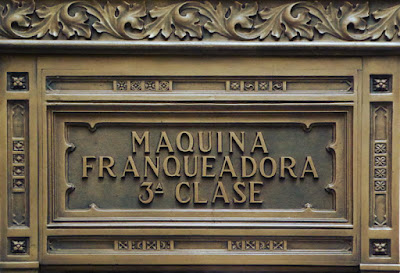 A place for third-class machine-franked mail
(Franking is mail that's sent for free)
By the way, today's entry on the Tucson Murals Project blog is of a beautiful building address in the Roma Norte neighborhood of CDMX.

If you click on the Location below, you'll see Palacio Postal on a map. Happy 2019!
Posted by Jerry Peek at 6:01 AM