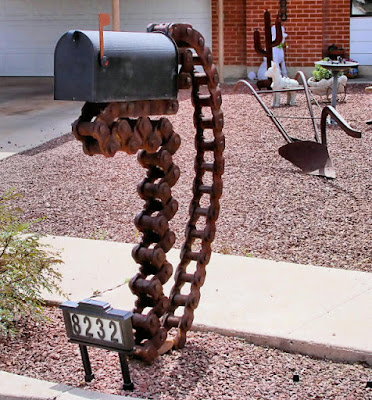 David Aber told me recently that, when he's headed somewhere, he takes different routes each time he can. That explains why he finds so many amazing mailboxes! (That's good advice for anyone — not just in a car, but especially on a bike. Side streets are probably safer and often more interesting.)

For obvious reasons, David calls this "Chainbox". He wrote: “I’ve seen a lot of creative ways to make a mailbox post, but never with a chain this large. It had to come from an enormous piece of equipment.”

(Then there's the rusted plow in the background that's been made to look like a bird.) His photo of the other side of the box is similar, without the bird.

He sent the photo on April 13th — the same date his camera's data says that he took it. Thanks!